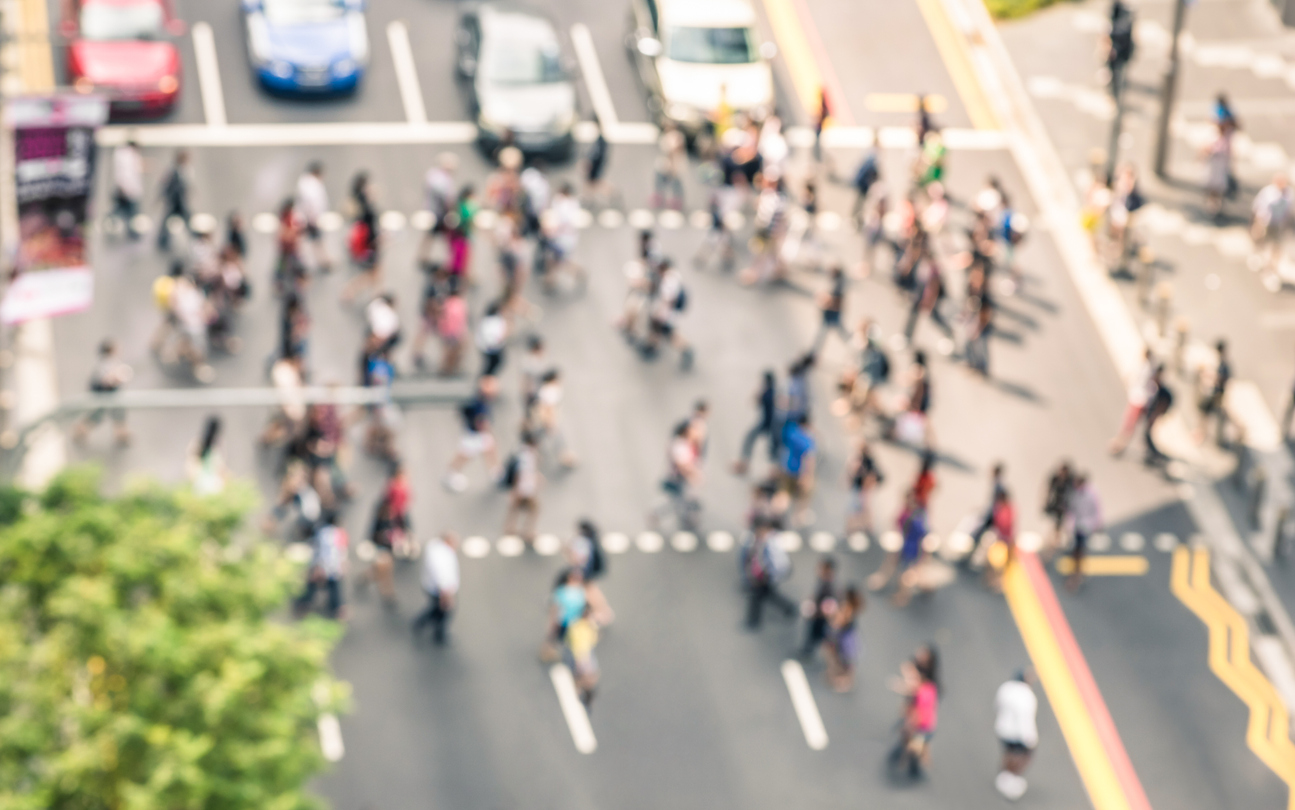 Singapore’s total population stood at 5.45 million as of June 2021 (Diagram 1). Amid the COVID-19 pandemic, the total population decreased by 4.1 per cent from June 2020 to June 2021. This was largely due to the decrease in the non-resident population. 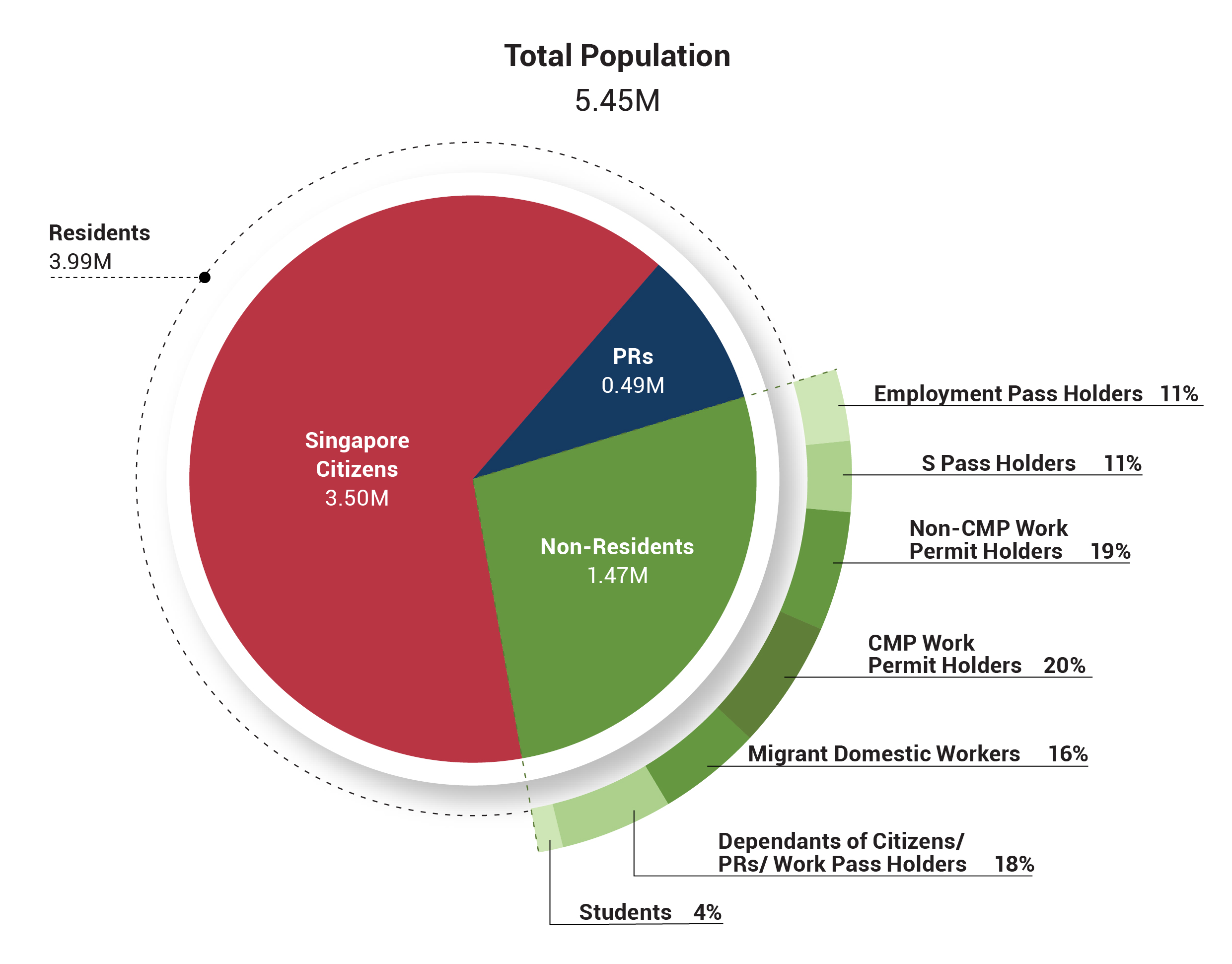 Numbers may not sum up due to rounding.

The citizen and PR populations decreased by 0.7 per cent (3.52 million to 3.50 million) and 6.2 per cent (0.52 million to 0.49 million) respectively between June 2020 and June 2021 (Chart 1). This was mainly because more citizens and PRs remained overseas continuously for 12 months or more due to COVID-19 travel restrictions, and were therefore not counted as part of our population.

Chart 1: Total Population by residency status, as of June 2021 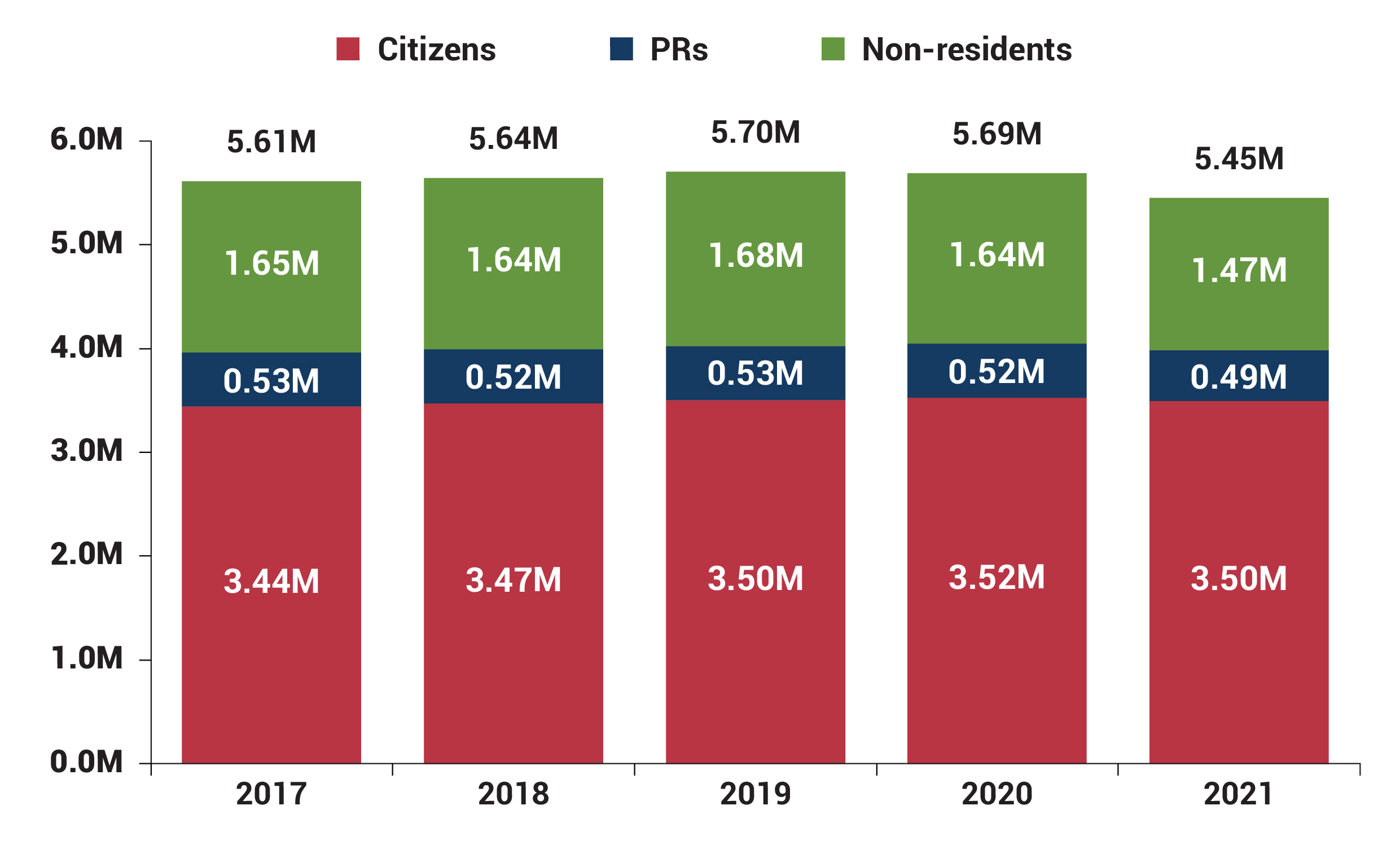 Numbers may not sum up due to rounding.

The non-resident population decreased by 10.7 per cent, to 1.47 million as of June 2021. This was because of a decrease in foreign employment in Singapore from June 2020 to June 2021 due to travel restrictions and uncertain economic conditions (Chart 2). The decrease was seen across all pass types, with the largest drop in Work Permit Holders in the Construction, Marine Shipyard, and Process sectors.

With increasing life expectancy and low fertility rates, the proportion of Singapore’s citizen population aged 65 and above is rising (Chart 3). This proportion has increased from 10.4 per cent in 2011 to 17.6 per cent in 2021, and is expected to increase to about 23.8 per cent in 2030.

Chart 3: Citizen population by broad age groups, as of June 2021

The 2030 numbers are meant to illustrate the possible change in the population that could occur if certain demographic assumptions prevail over the stated period. These assumptions may or may not be realised. 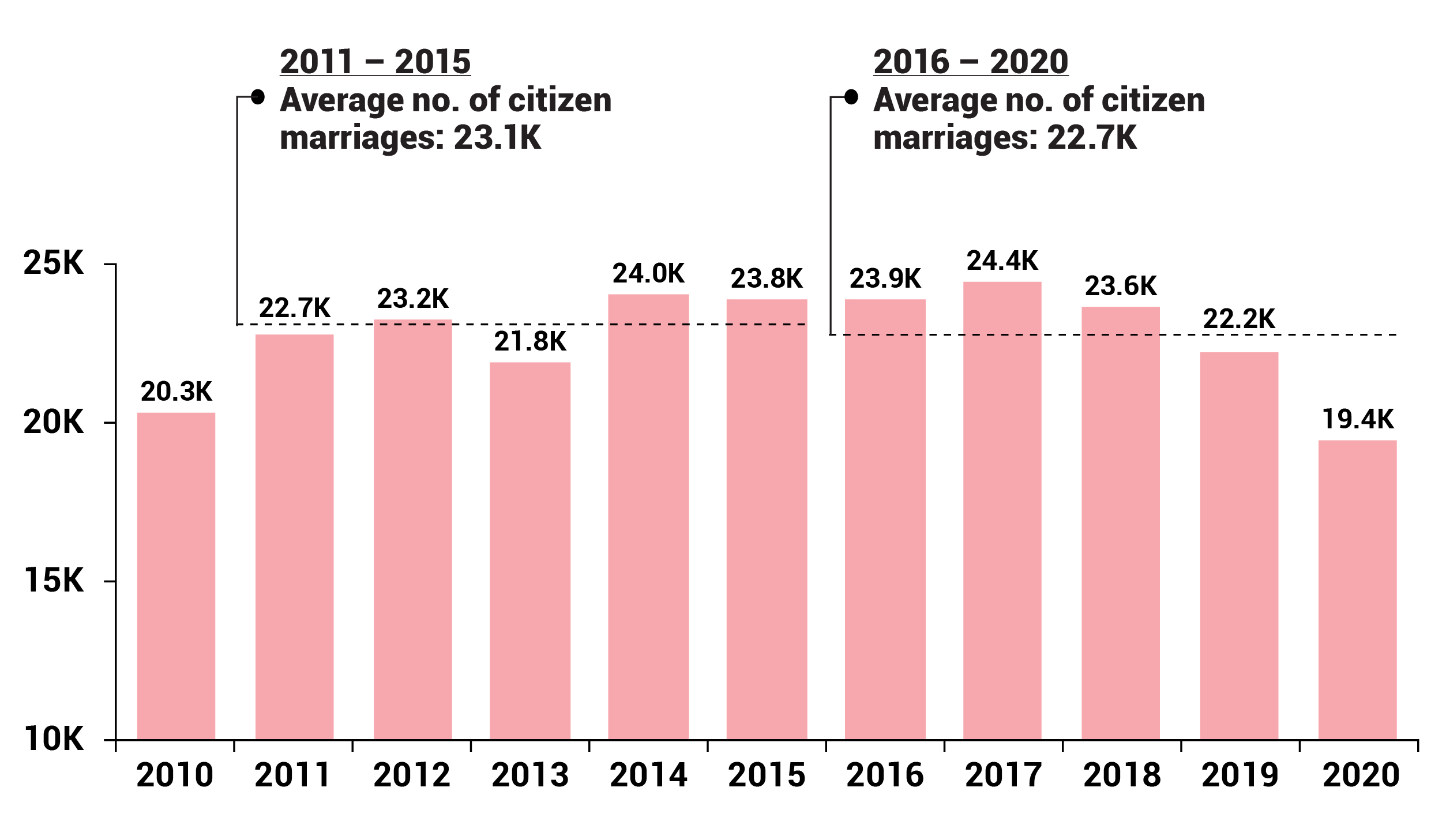 The figures are based on the full calendar year (January to December). 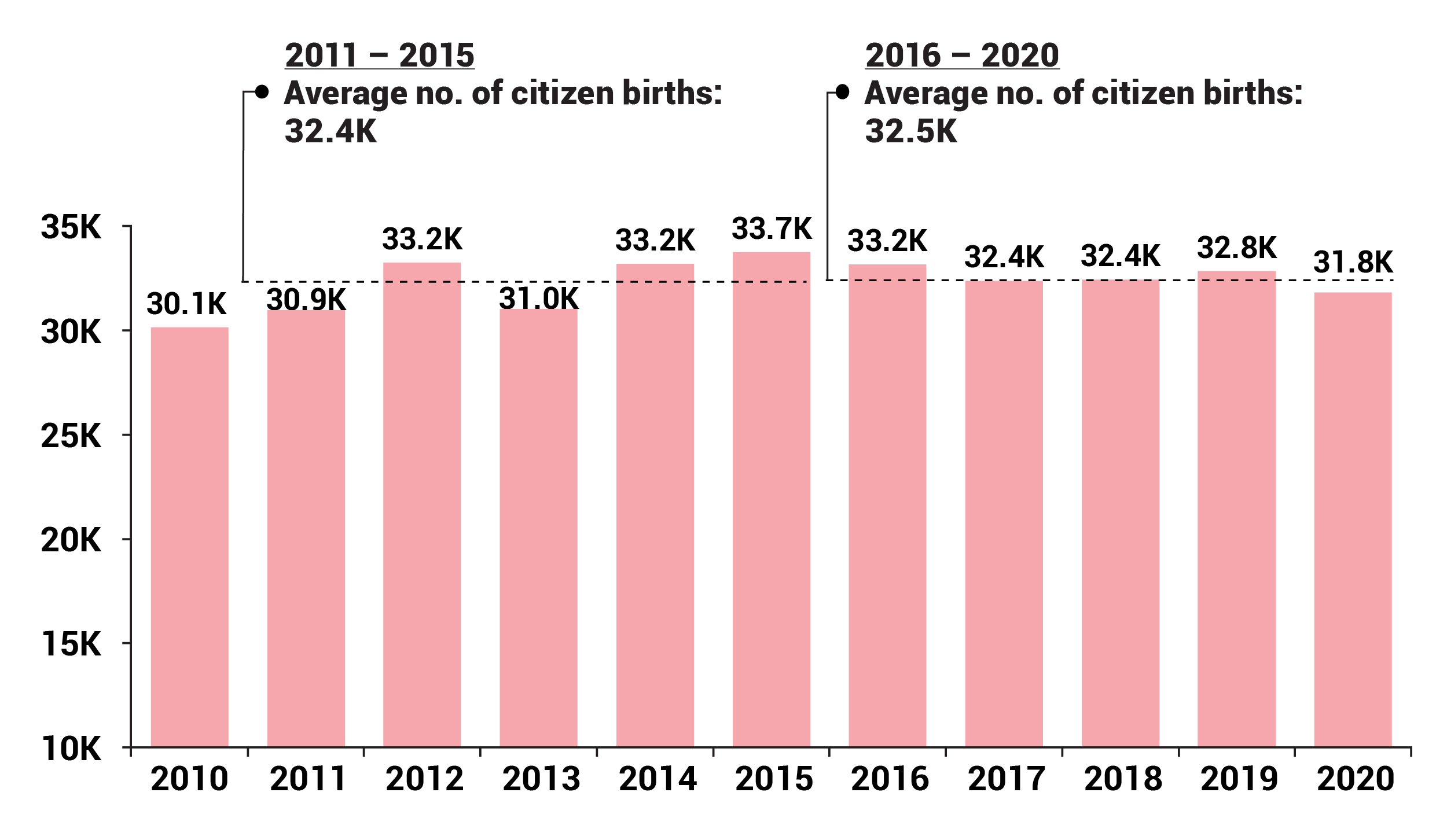 The figures are based on the full calendar year (January to December).

However, resident Total Fertility Rate remained below the replacement rate of 2.1 at 1.14 in 2019, which is the same as the year before. This is partly due to later marriages and childbearing. The median age of first-time mothers increased from 28.5 years in 2000, to 30.6 years in 2019.

These figures are from the annual Population in Brief publication, which provides key updates and trends on Singapore’s population.