Findings of Public Consultations on Marriage and Parenthood

The National Population Secretariat (NPS) in the Prime Minister’s Office worked with the Ministry of Community Development, Youth and Sports (MCYS), the Ministry of Manpower (MOM), REACH and the National Family Council (NFC) to facilitate a series of public consultation sessions involving more than 300 participants from April to July 2008, to seek feedback on the marriage and parenthood (M&P) situation in Singapore.

The purpose of the consultation exercise was to enable the Government to better understand the impact of the last Marriage and Parenthood review in 2004, which introduced a package of measures to try and encourage more marriages and births in Singapore.

In MCYS’s survey which polled about 6,000 respondents to understand their perceptions and attitudes towards M&P, 85% of single respondents still desire to marry and almost 80% of married respondents would want two or three children. An encouraging 83% of respondents also felt that the 2004 M&P package had helped to create a more pro-family environment in Singapore.

At the consultation sessions, the public gave feedback on the barriers to translate Singaporeans’ desire for relationship, marriage and parenthood into reality. The key findings are as below:

Socialisation was viewed as the first step towards marriage and subsequent parenthood. While costs could delay marriages, the determining factor was more often than not the ability to meet a suitable partner. Key challenges in socialisation and marriage are as follows:

For couples, financial security, time and childcare arrangements were three key considerations. In particular, parenthood was increasingly viewed as a shared responsibility between the couple as women wanted to have children and work at the same time. Key factors cited as challenges to having and raising children were as follows:

There were three running themes across socialisation and marriage, and having and raising children that could affect Singaporeans from trying to fulfil their personal M&P goals:

Attached are the following annexes for reference:

STATISTICS ON MARRIAGE AND PARENTHOOD

Trends in Marriage and Parenthood 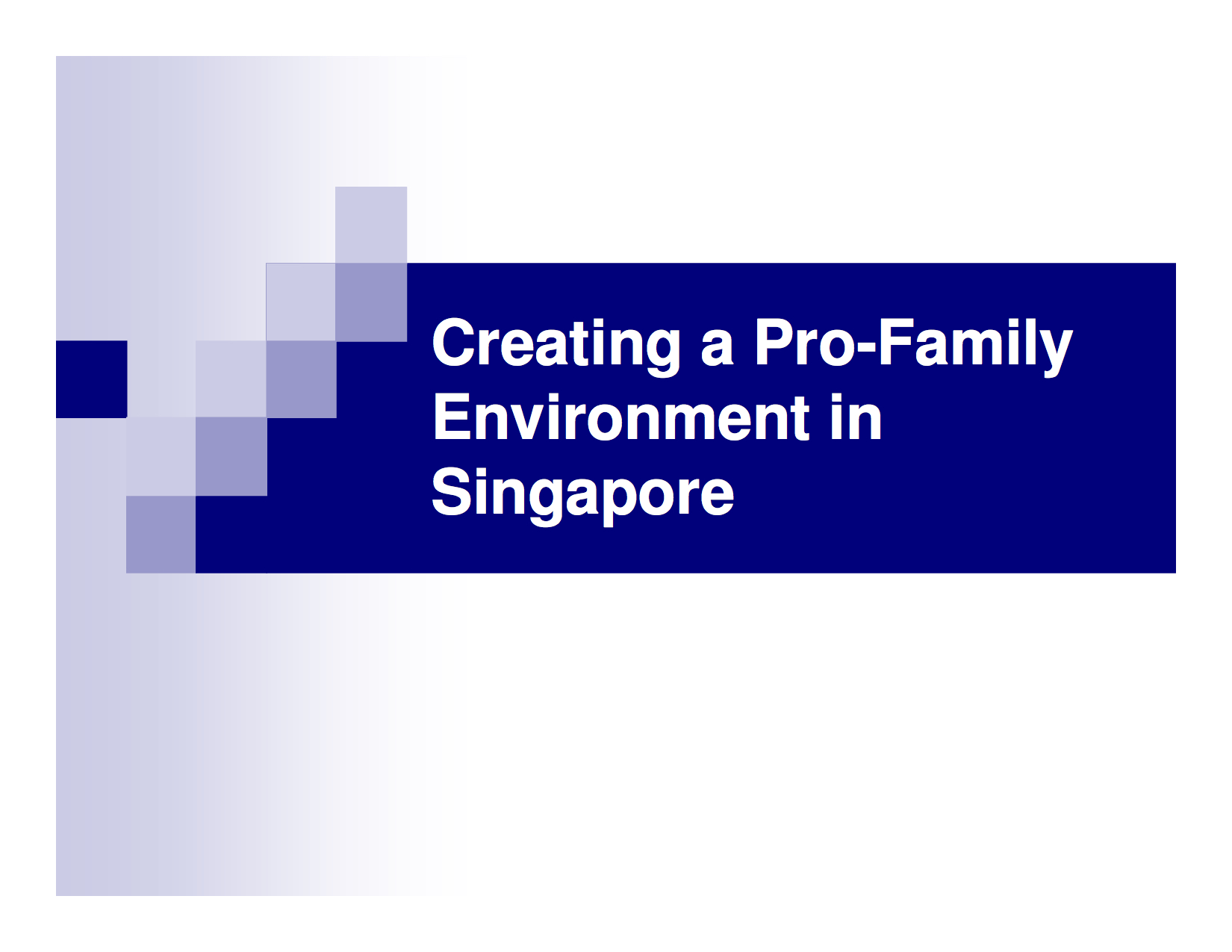 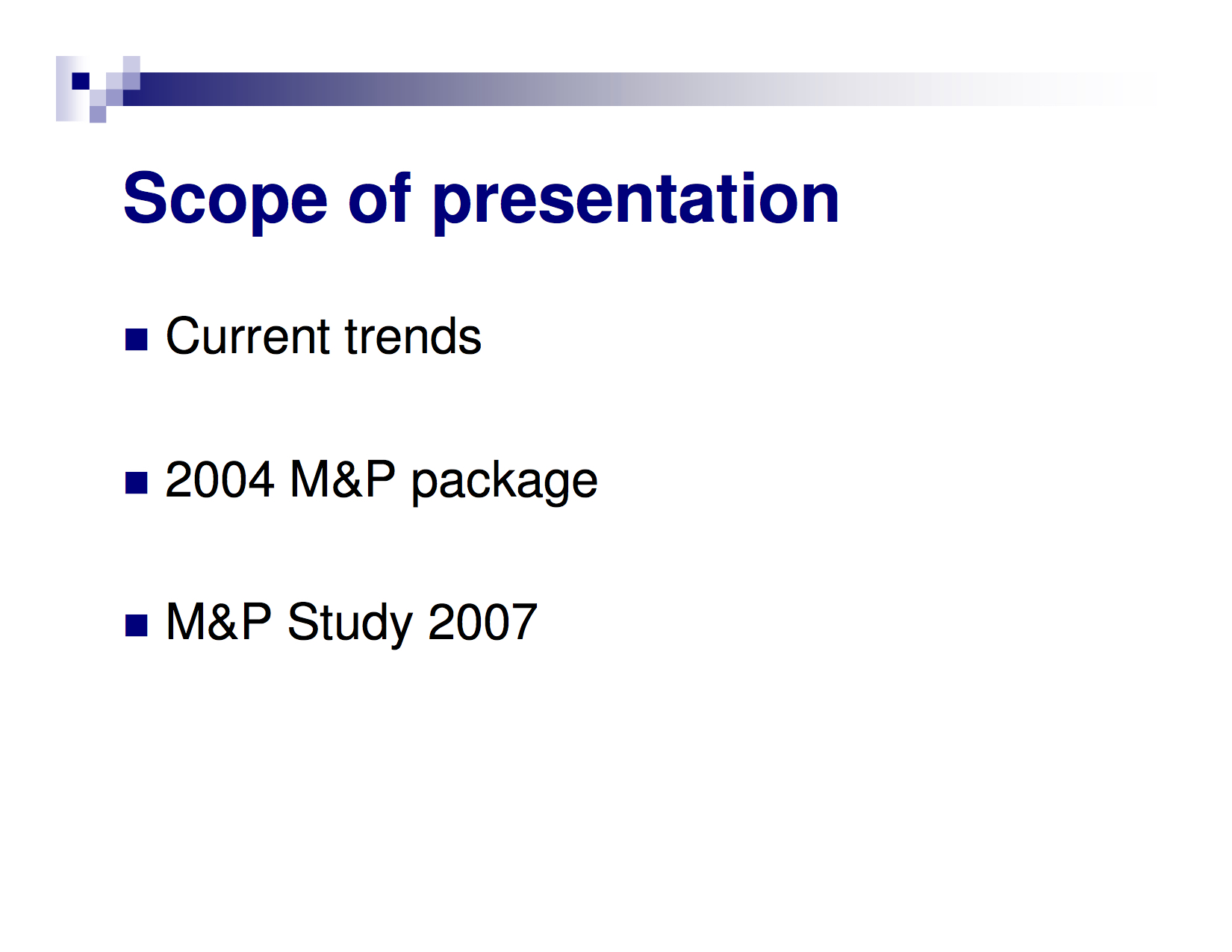 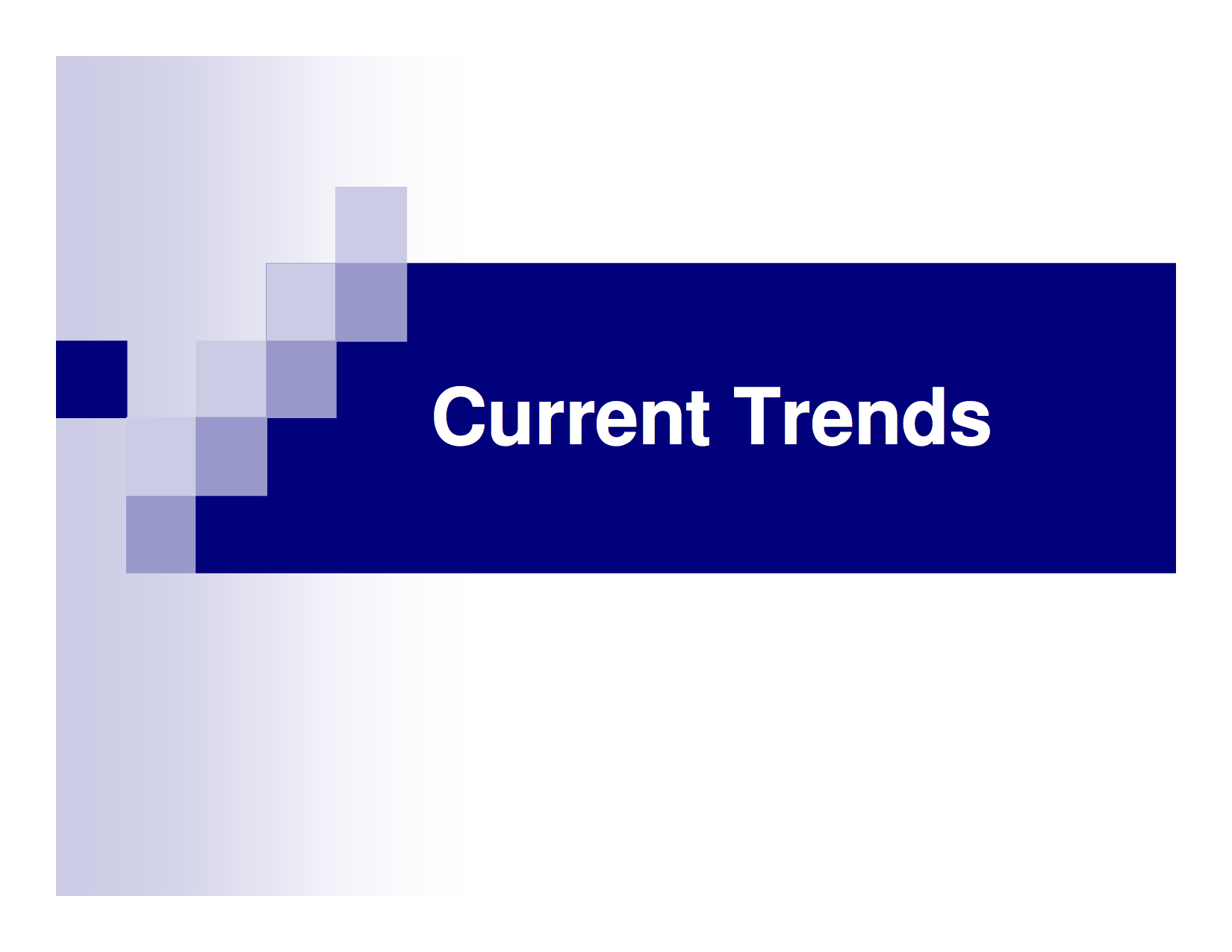 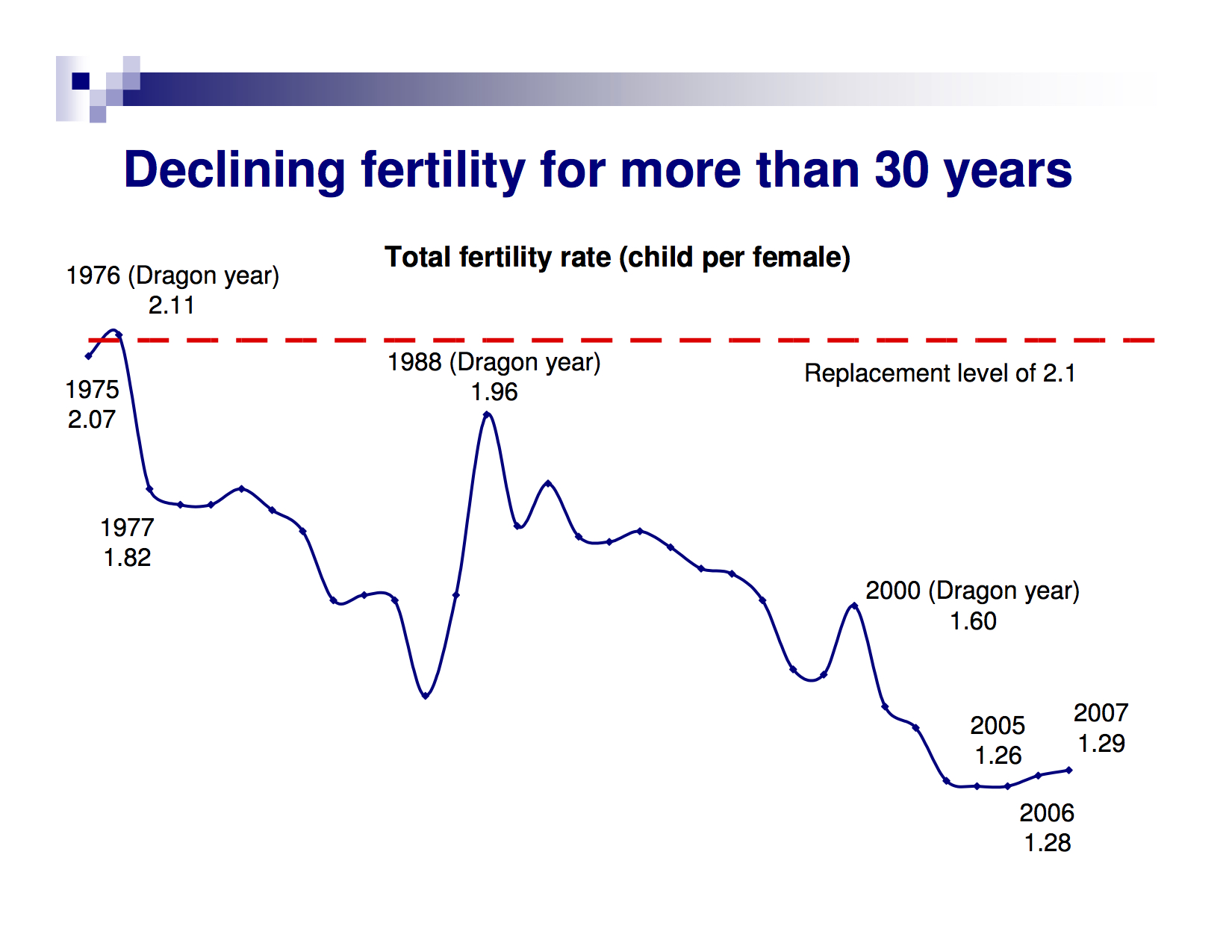 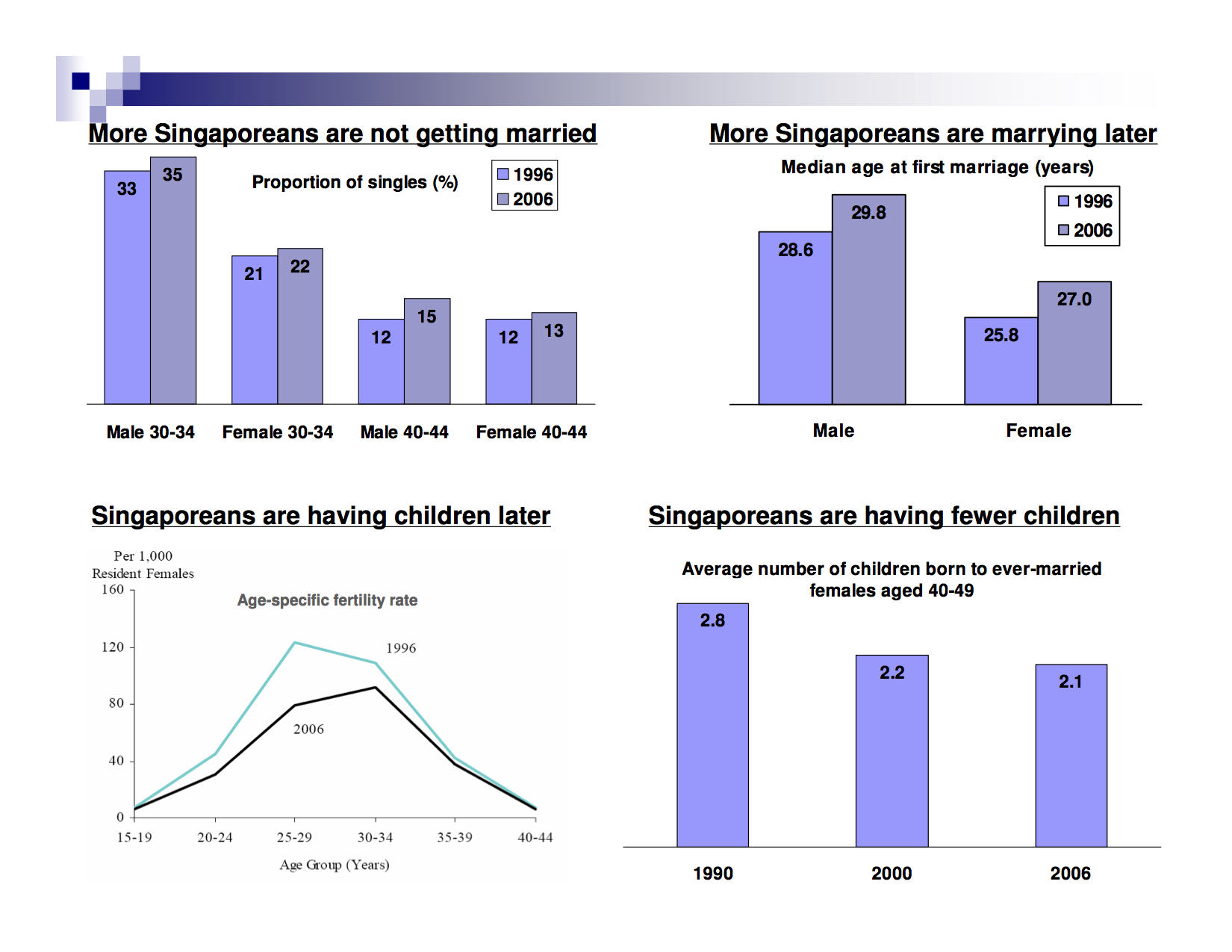 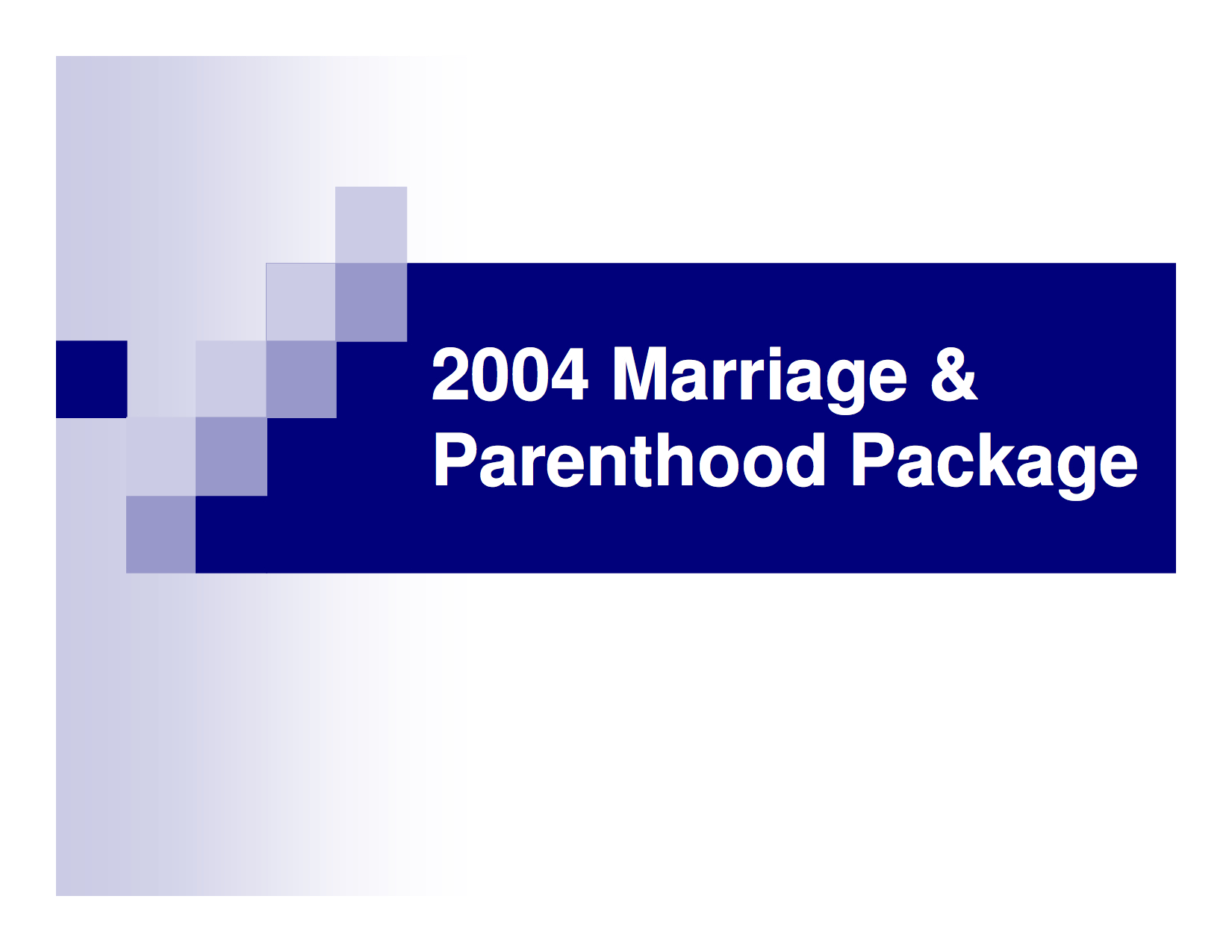 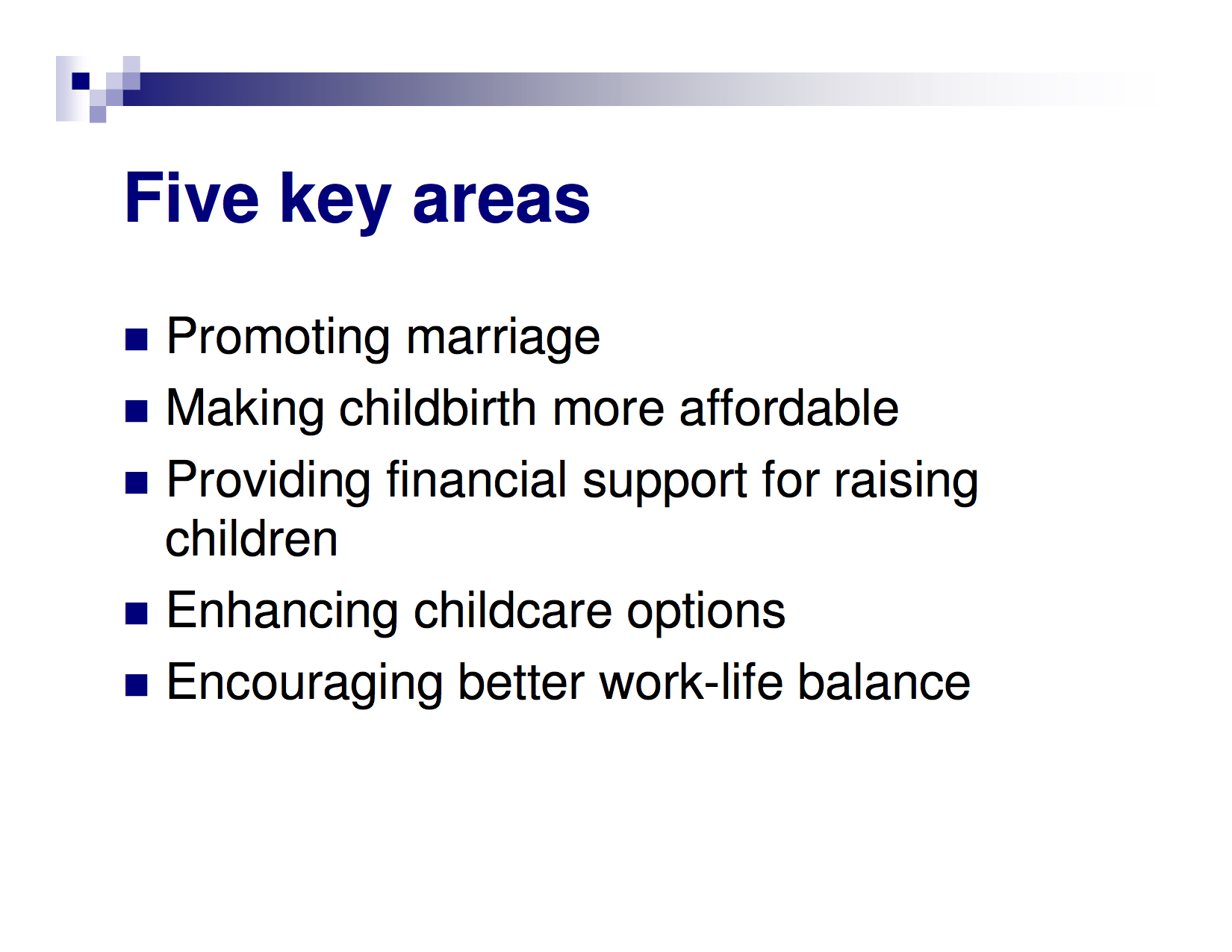 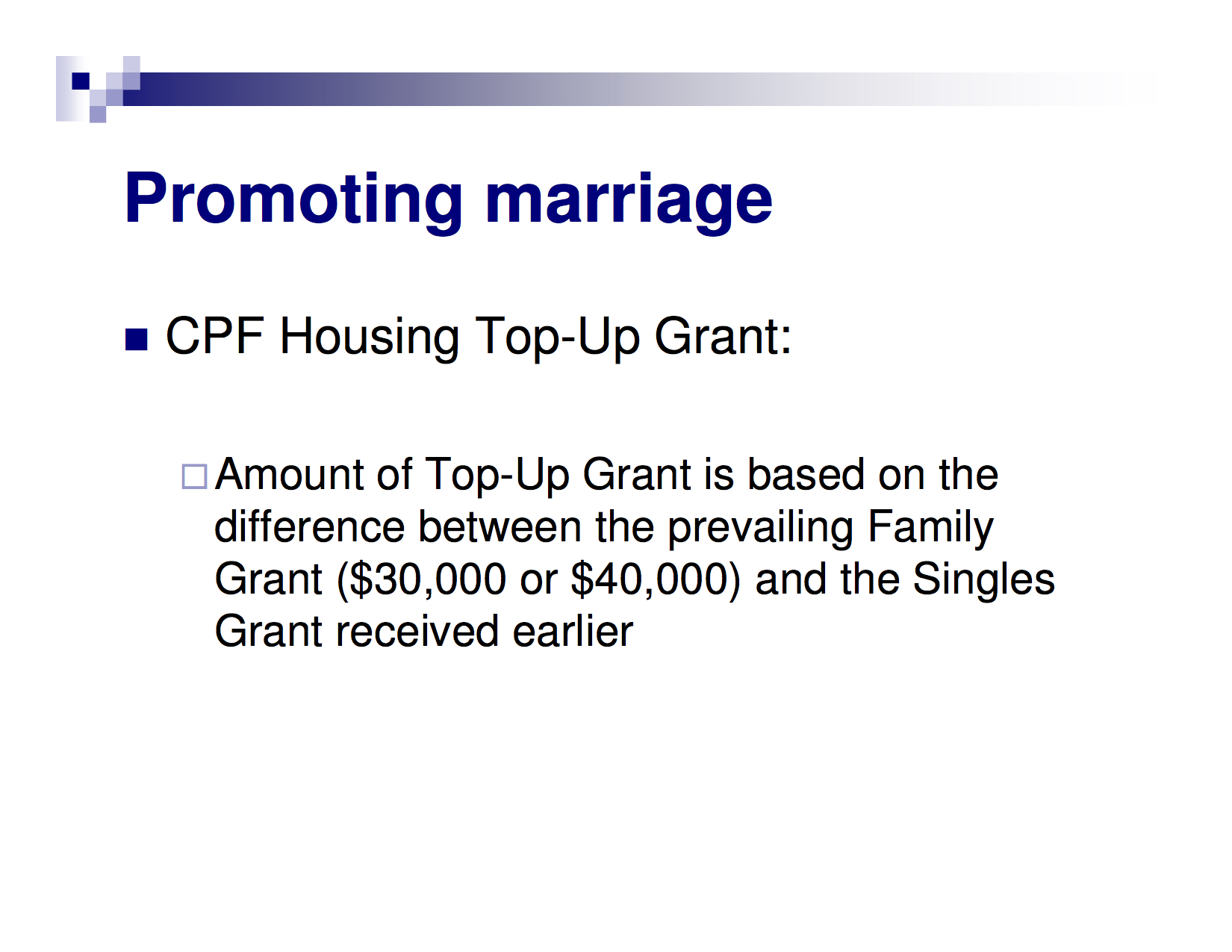 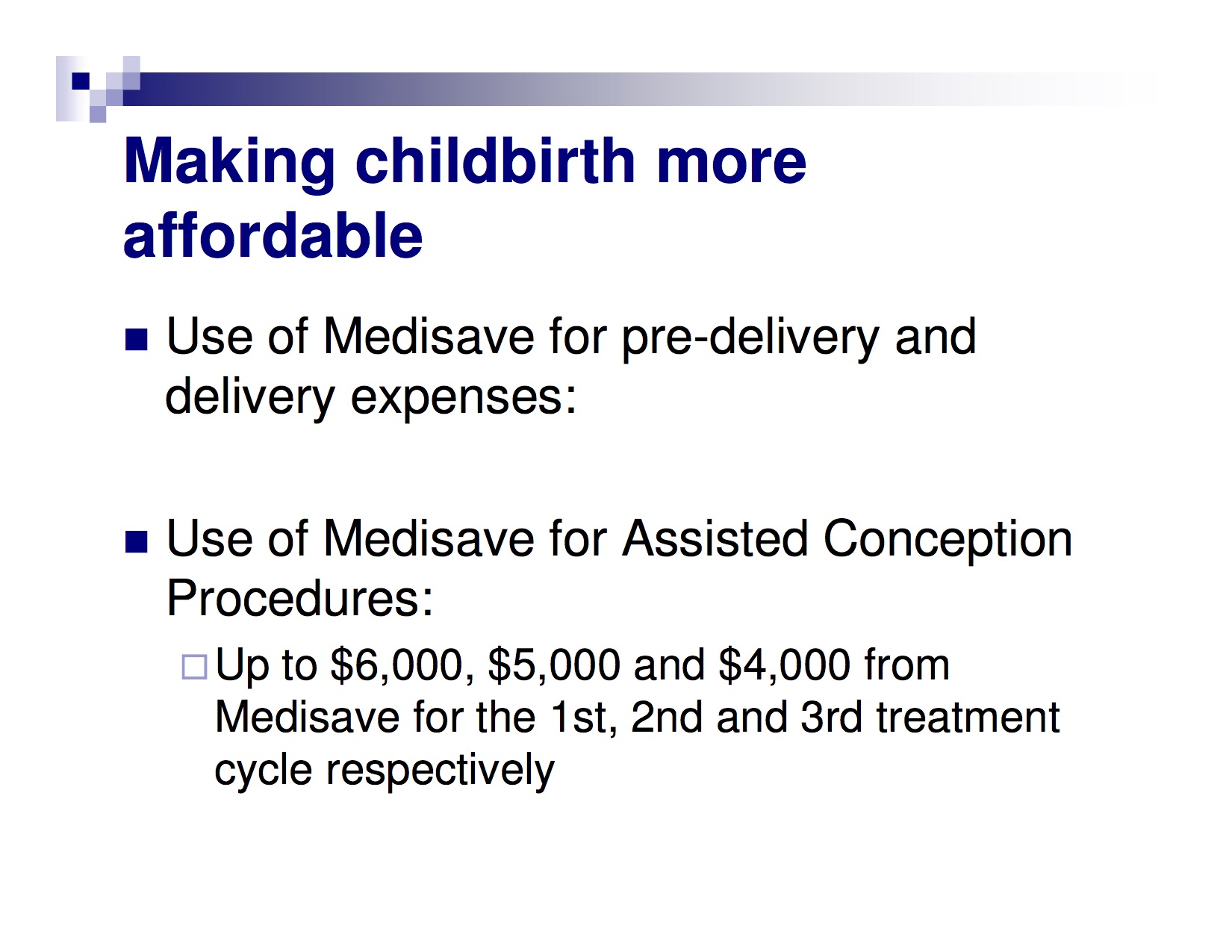 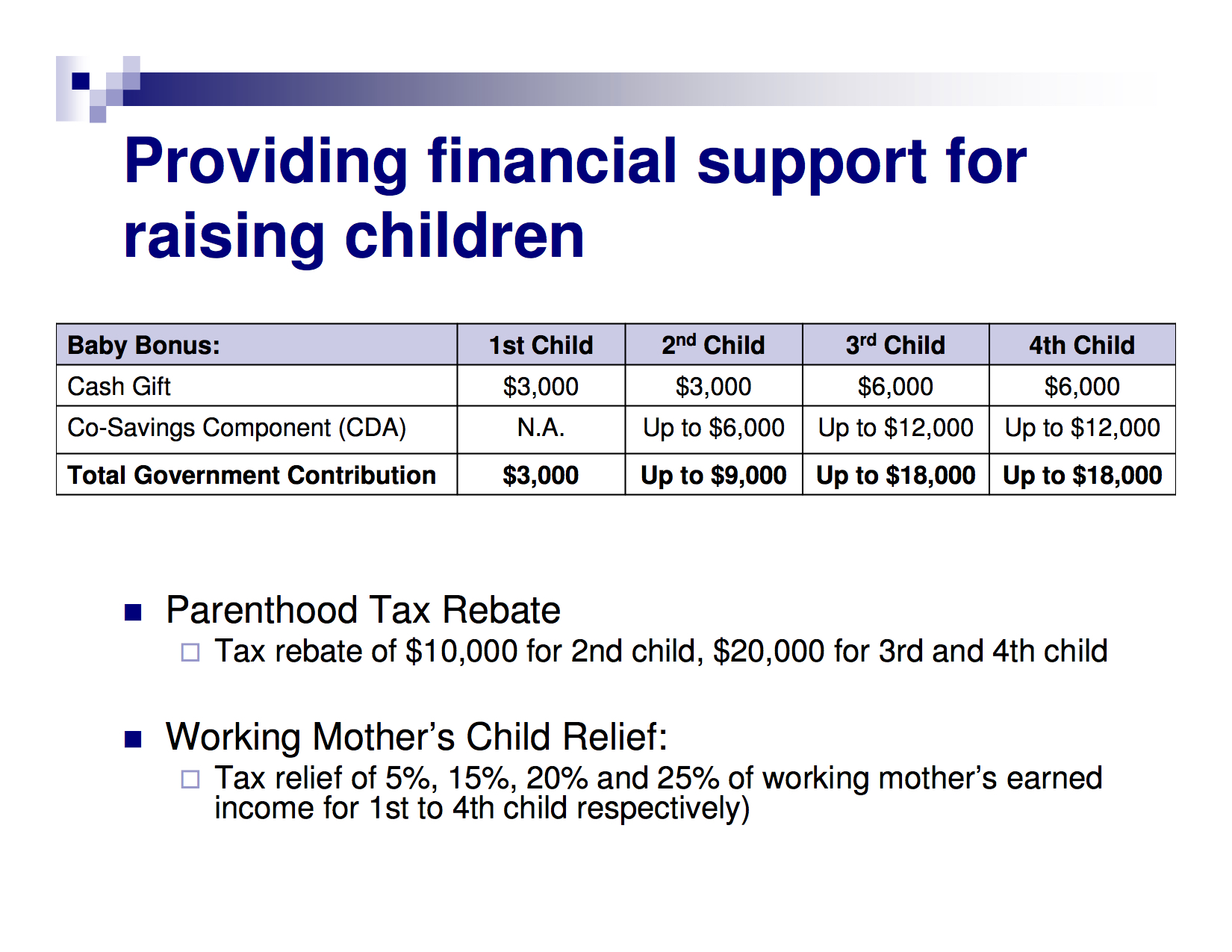 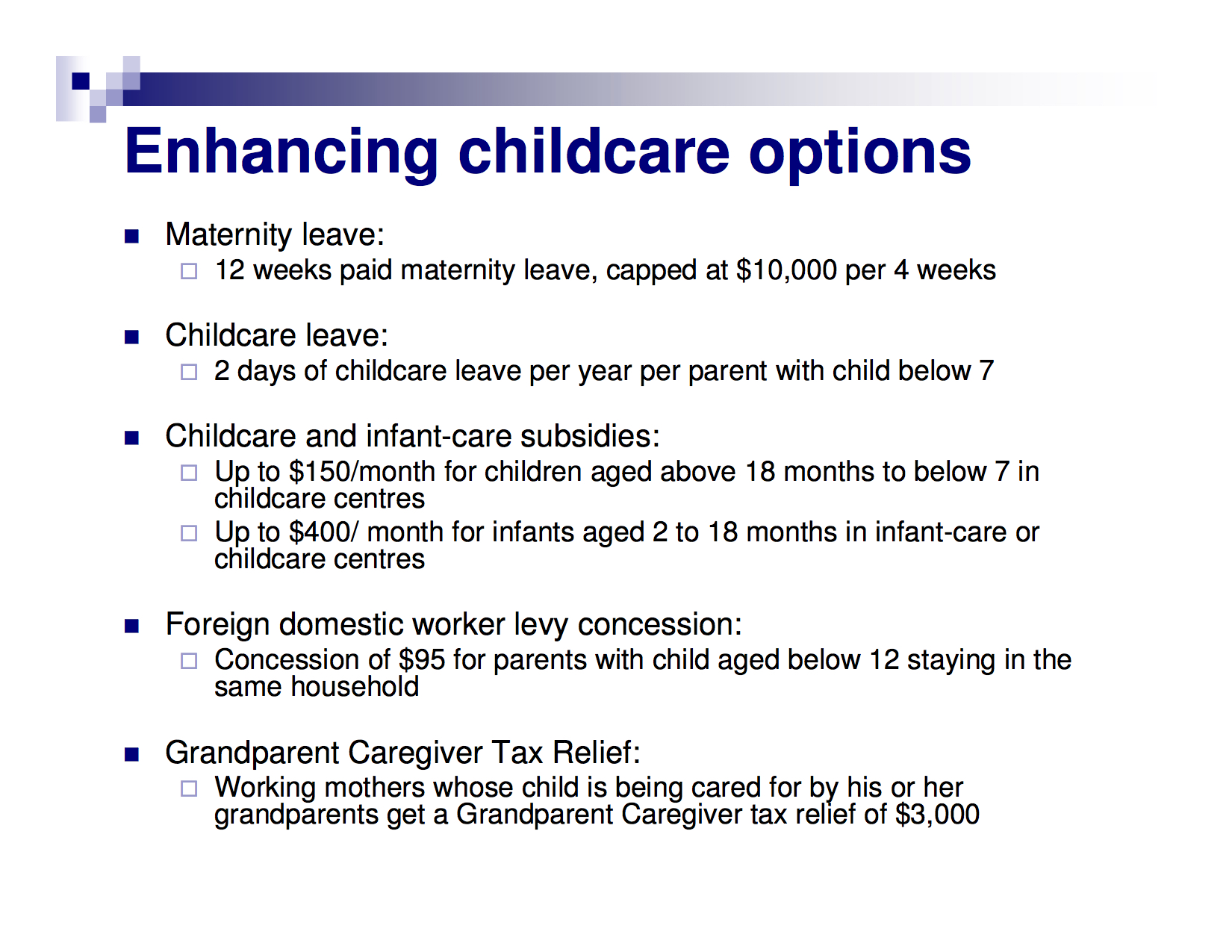 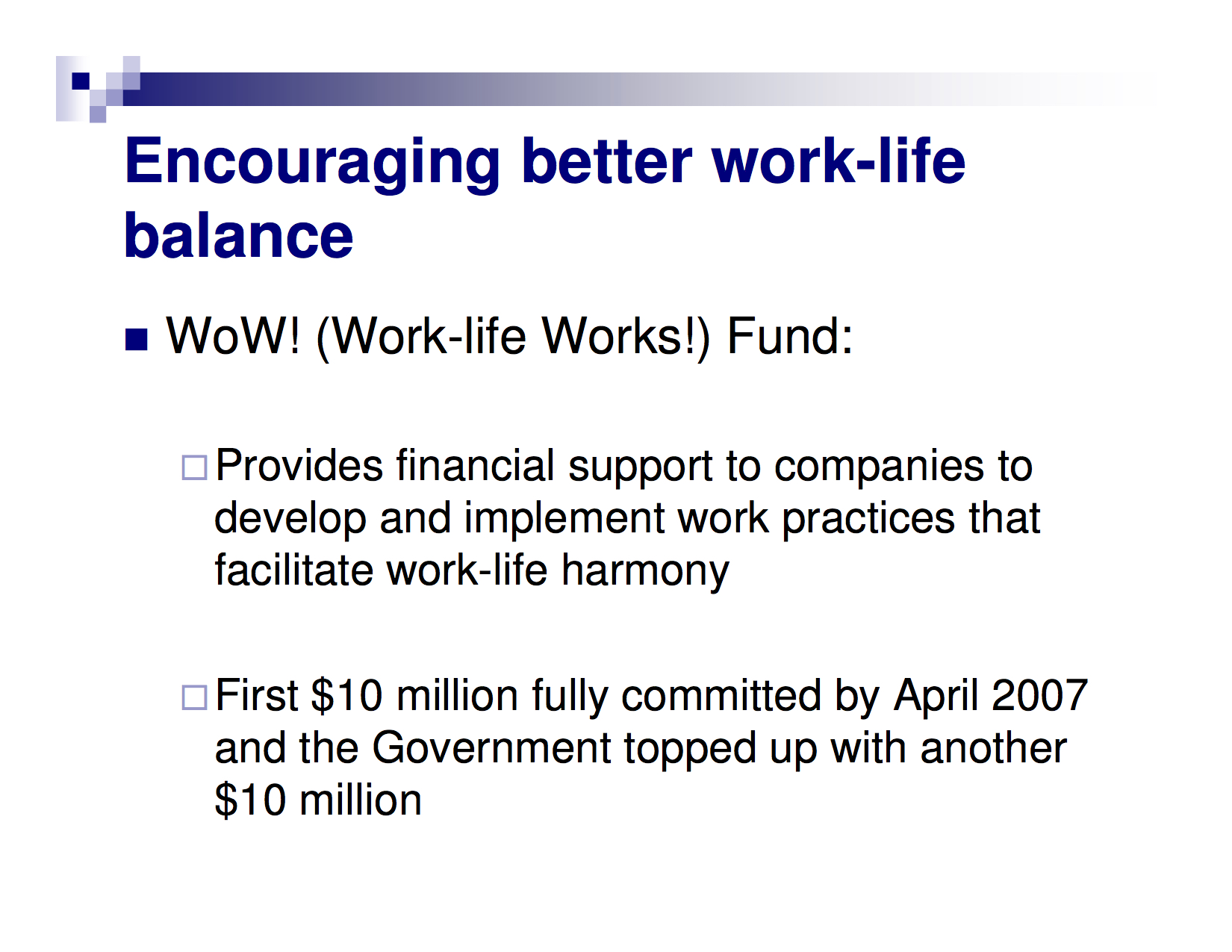 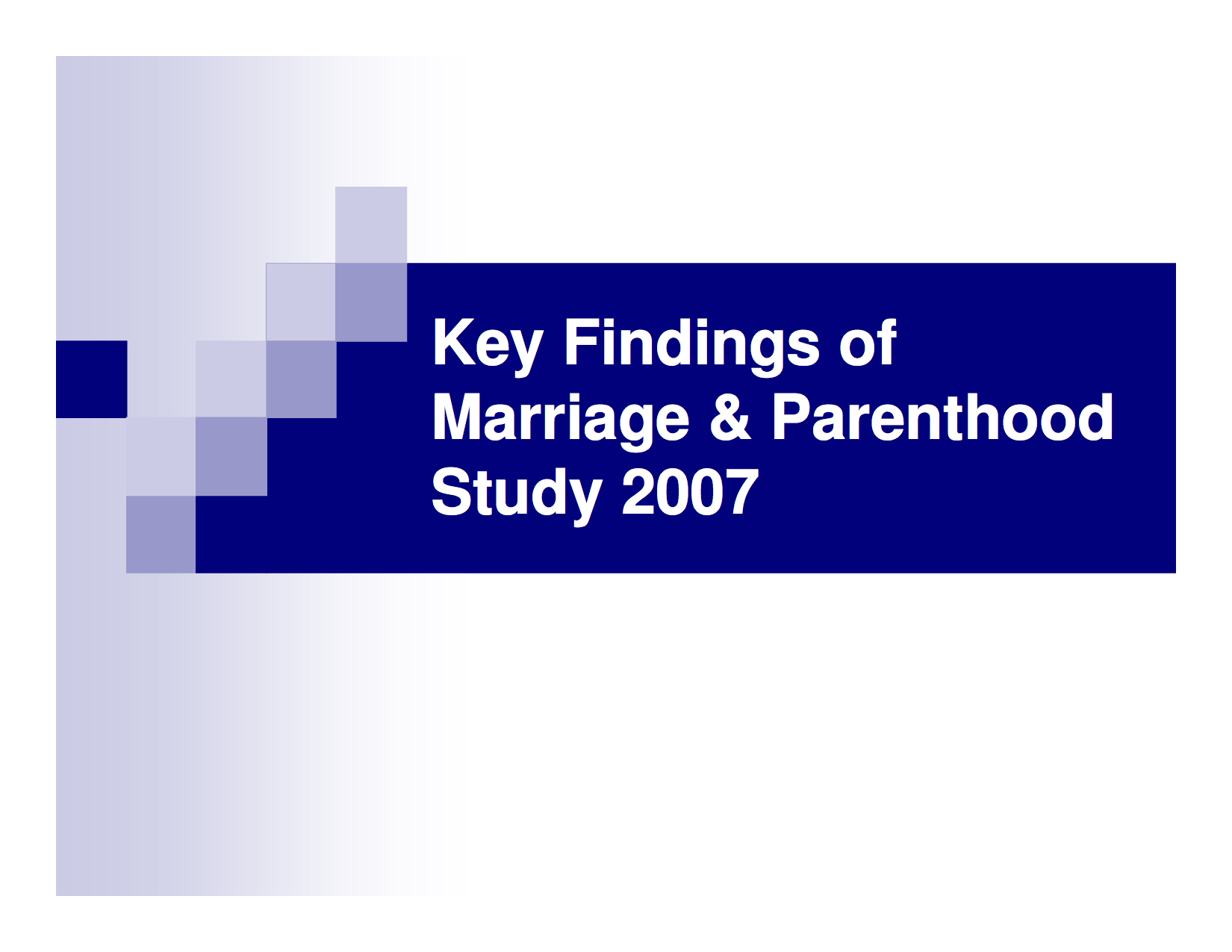 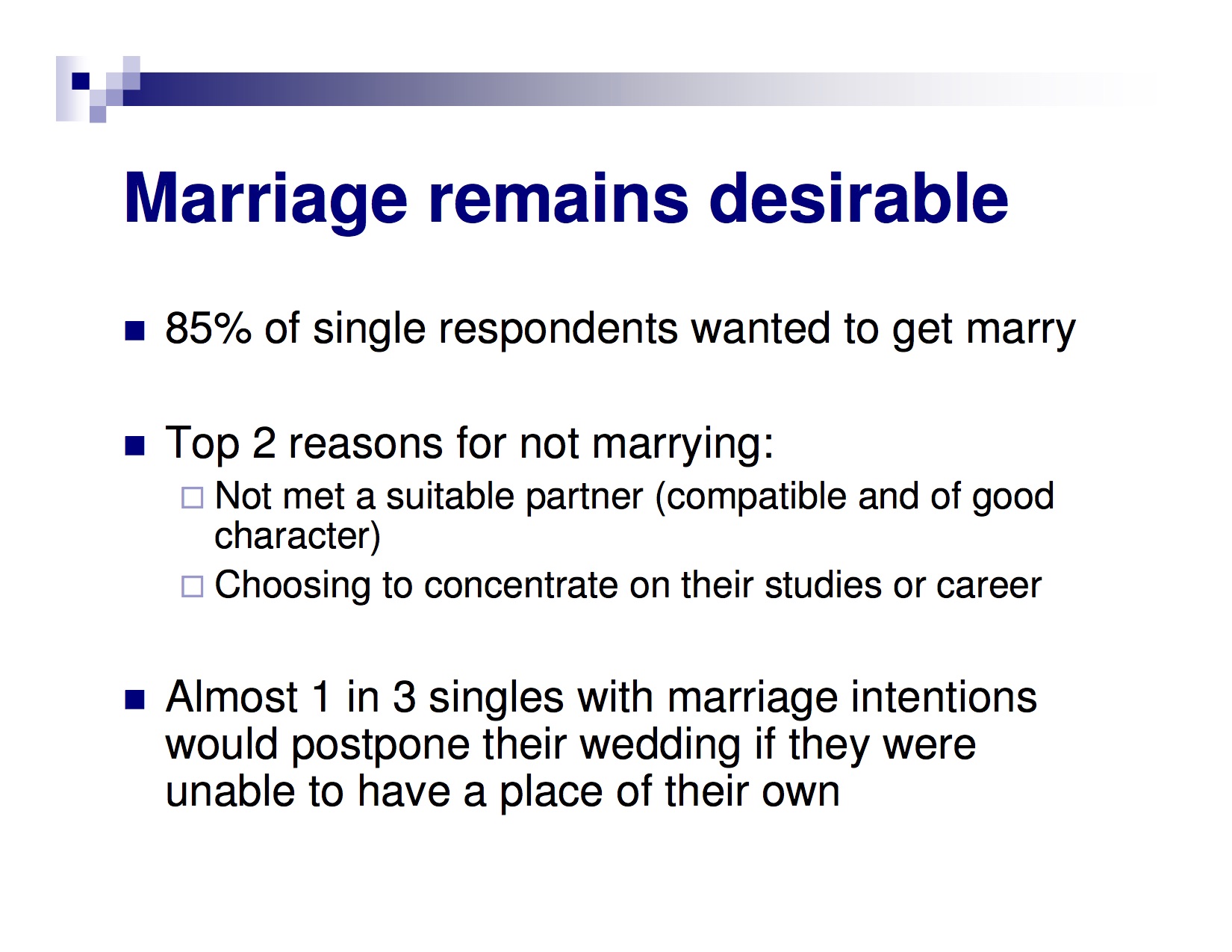 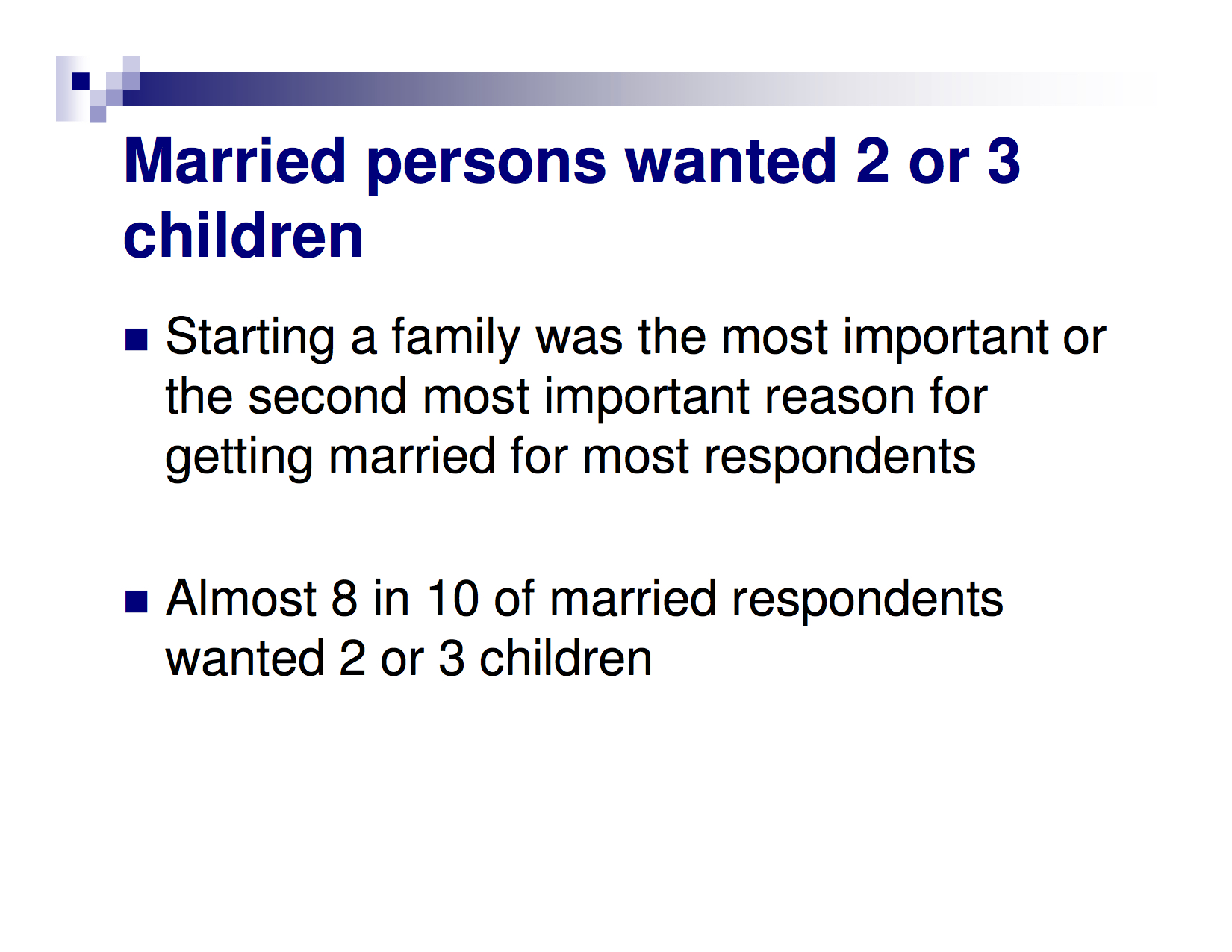 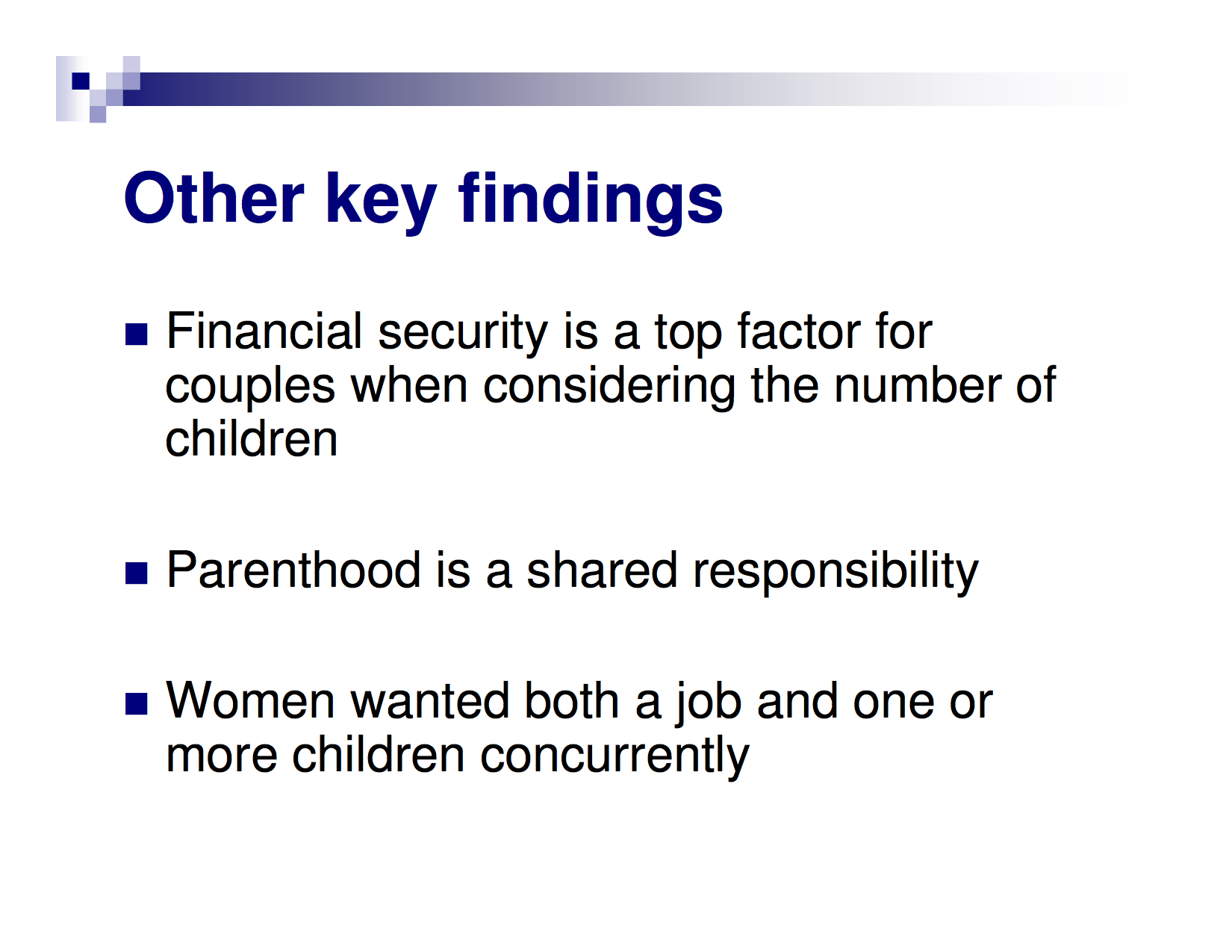 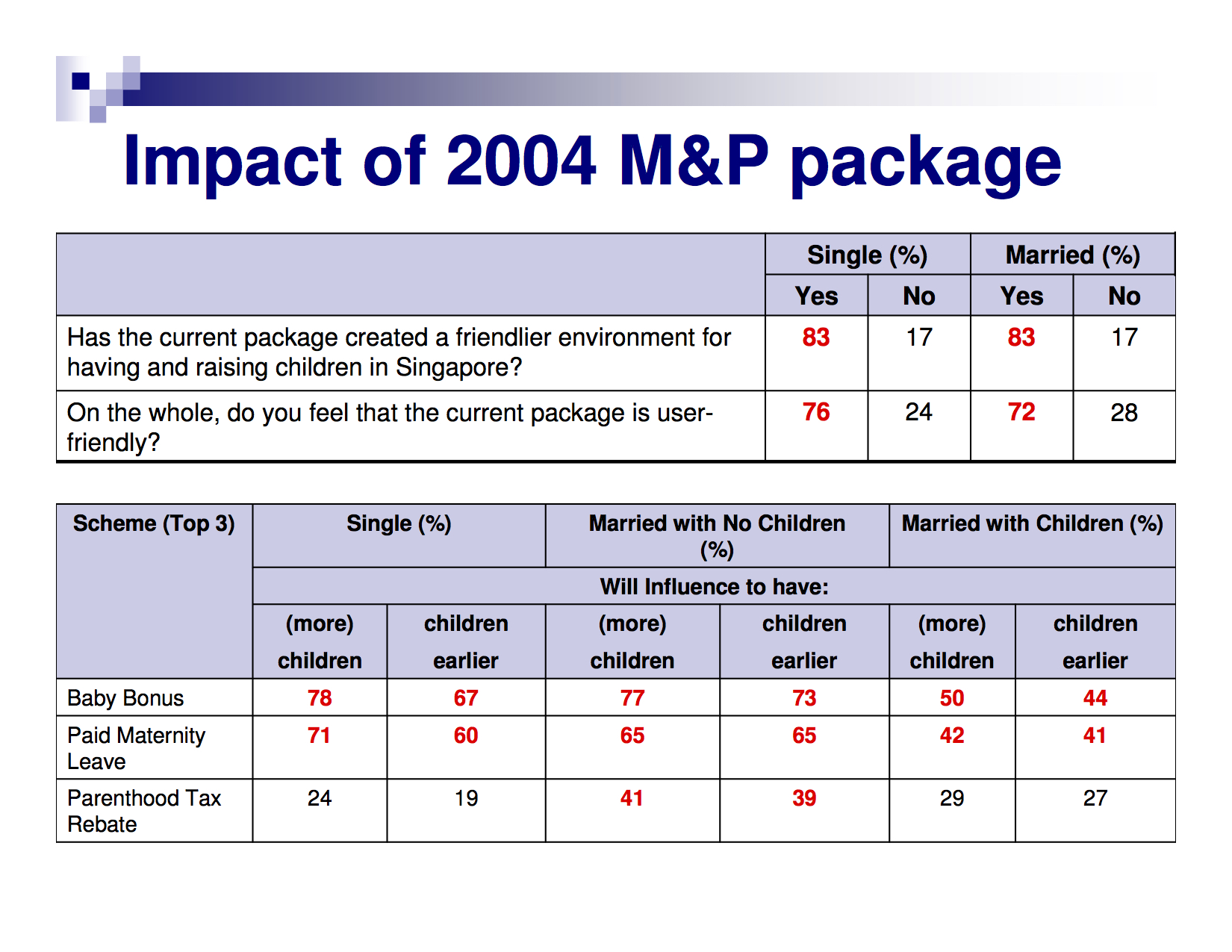 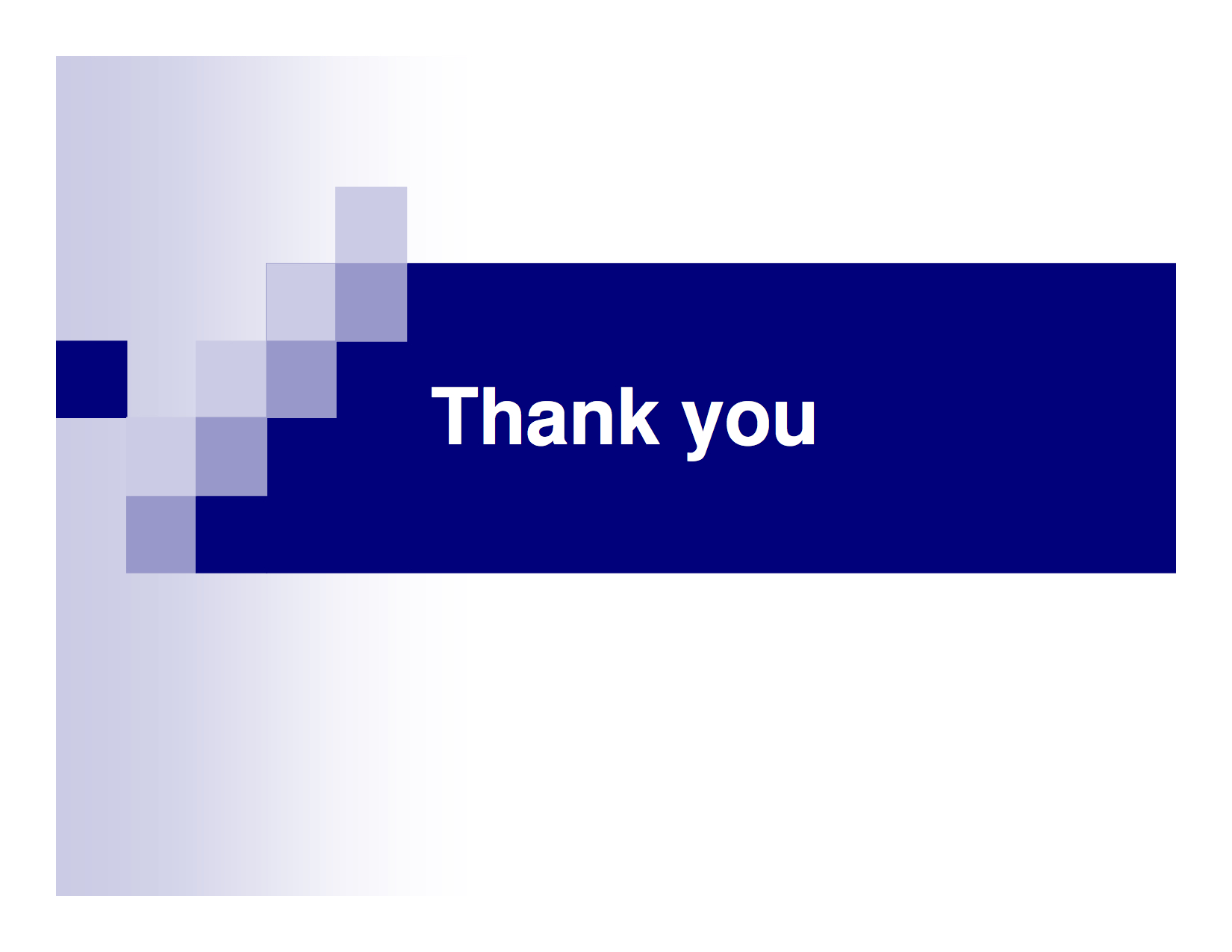 The Marriage and Parenthood (M&P) Study 2007 is a survey commissioned by the Ministry of Community Development, Youth and Sports (MCYS) which seeks to understand the attitudes and perceptions of Singapore residents towards marriage and parenthood.

The 2007 survey found that the percentage of single respondents who desire to marry had increased from 74% in the 2004 survey to 85% in the 2007 survey. The top 2 reasons cited for not marrying continue to be not having met a suitable partner (compatible and of good character); and choosing to concentrate on their studies or career. Single respondents appear to be more active in searching for a marriage partner now as the percentage of those who were ambivalent about marriage decreased from 21% in 2004 to 13% in 2007. (Please refer to Annex A, Diagram 1 and Table 1)

Most of those single respondents (89%) in the 2007 survey who planned to marry their current partners preferred to live together in their own homes after marriage. Almost a third of them indicated that they would postpone their wedding if they were unable to have a place of their own. (Please refer to Annex A, Diagrams 2 and 3)

More intend to have 2 or 3 children

Most married respondents from the 2004 and 2007 surveys cited starting a family as either the most important or the second most important reason for getting married. (Please refer to Annex A, Diagram 4)

The average number of children that all married respondents actually had at the point of survey was fewer than 2 children in 2004 (1.5 children) and 2007 (1.6 children). When asked if they had completed their family size, almost 4 in 10 married respondents from the 2007 survey said that they wanted at least one more child and most of them were confident of achieving this intention. Across both the 2004 and 2007 surveys, overall family size stabilised at around 2 children for couples towards the end of their reproductive cycles (i.e. those aged 40 to 44 years old). (Please refer to Annex A, Tables 2, 3 and 4 and Diagrams 5 and 6)

Parenthood viewed as a shared responsibility

While financial security came in first on the respondents’ minds when considering the number of children they would have, the second most common factor cited as influencing their decision was spousal consensus. Parenthood was viewed as a shared responsibility between the couple. This was consistent for both the 2004 and 2007 surveys. (Please refer to Annex A, Table 5)

Women want both family and work at the same time

Over 80% of single and 60% of married female respondents indicated a preference to be a working mother, i.e., to have a job and one or more children concurrently. This was consistent with the 2004 survey. However, the percentage of married women who had indicated in the 2007 survey that it was ideal to leave the workforce when they had children or when their children were still young increased by 5 percentage points (from 29% to 34%). This was likely due to the preference to take care of their young children themselves. (Please refer to Annex A, Table 6 and Diagram 7)

Impact of marriage and parenthood measures

In 2004, the Government enhanced existing pro-family measures and introduced new initiatives to create a more conducive environment for couples to start and raise a family. (Please refer to Annex B for more details on the 2004 marriage and parenthood package)

The 2007 survey found that 83% of respondents agreed that the current marriage and parenthood package had created a more family-friendly environment conducive for having and raising children. More than 7 in 10 respondents also found current measures easy to understand. Amongst the current measures, the Baby Bonus and extended Paid Maternity Leave schemes were the two most influential policies that would persuade respondents to have more children and to have them earlier. (Please refer to Annex A, Tables 7 and 8)

Issued by: MINISTRY OF COMMUNITY DEVELOPMENT, YOUTH AND SPORTS Date: 05 May 2008

DETAILED BREAKDOWN OF FINDINGS FROM

*“suitable partner” refers to compatibility and of good character 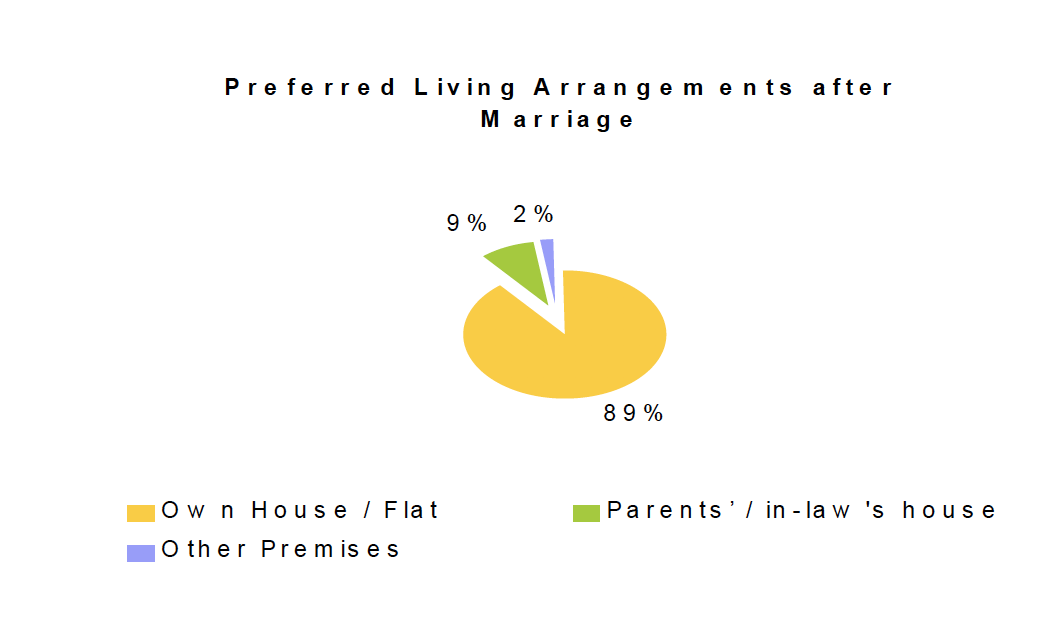 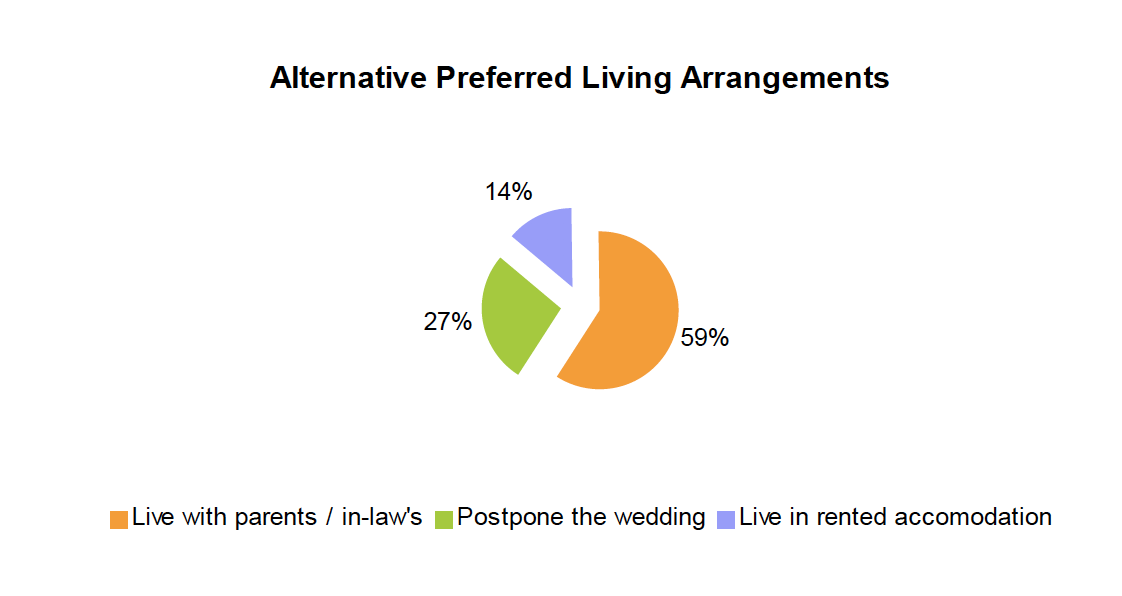 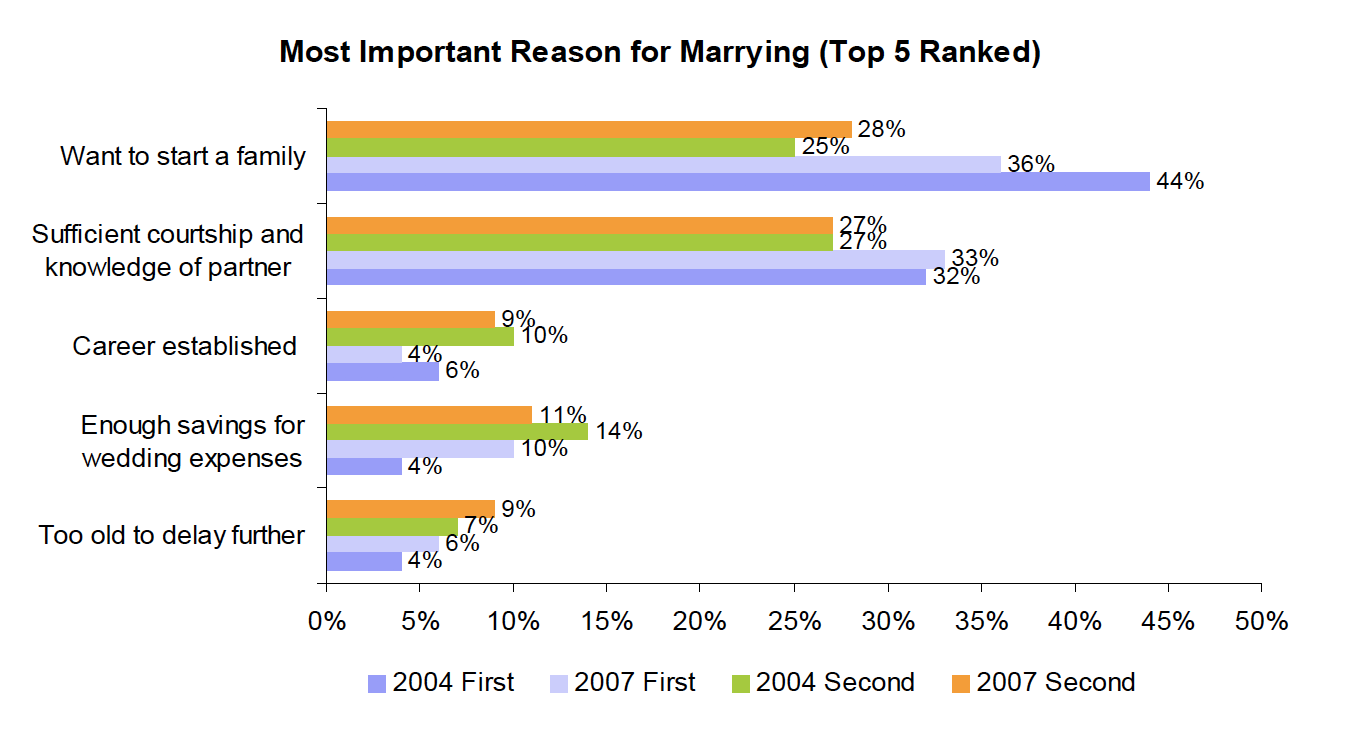 * A small percentage of non-responses had been excluded from these columns. ** Figures in Tables 2, 3 and 4 have been rounded up. 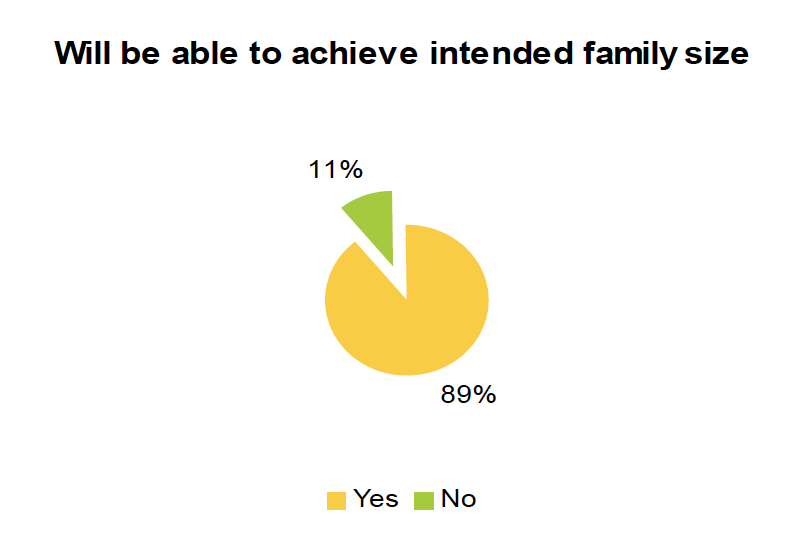 Parenthood viewed as a shared responsibility (Source: Marriage and Parenthood Studies 2004 and 2007)

Women want both family and work at the same time (Source: Marriage and Parenthood Studies 2004 and 2007)

*Figures have been rounded up. 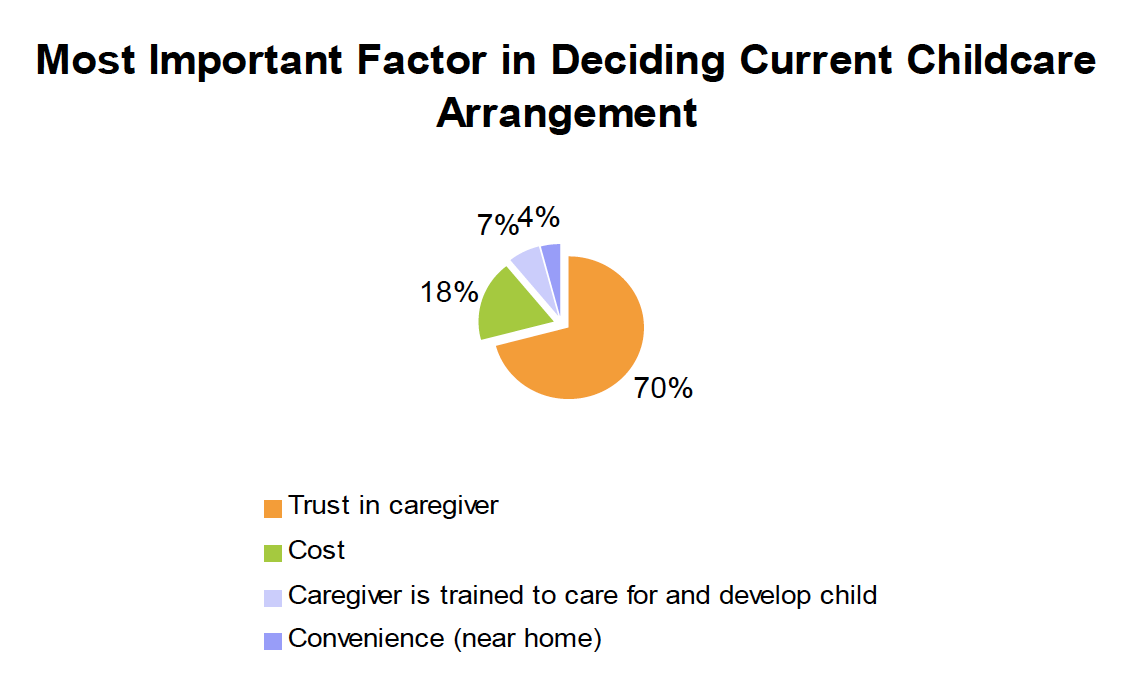 Use of Medisave for 4th and Higher Order Births and Pre-Delivery Expenses. Singaporeans can use their Medisave to pay for pre-delivery medical expenses (e.g. ultrasound scans) in addition to delivery expenses, for all their children. These measures apply to parents of babies born on or after 1 August 2004.

Use of Medisave for Assisted Conception Procedures. Couples who face difficulty conceiving have been able to use more from their Medisave accounts to pay for Assisted Conception Procedures (ACP), such as In-Vitro Fertilisations, Intra-Uterine Inseminations and Gamete Intra- Fallopian tube Transfers. Couples who start their ACP treatment cycles on or after 1 August 2004 are able to use up to $6,000, $5,000 and $4,000 from Medisave for the 1st, 2nd and 3rd ACP treatment cycle respectively. This is an increase from the previous limit of $4,000 per treatment cycle, up to a maximum of 3 cycles.

The Baby Bonus Scheme. The Baby Bonus Scheme supports parents’ decision to have more children by helping to lighten the financial costs of raising children. It was first introduced in April 2001 for the second and third child, and further enhanced in 2004, with benefits extended to the first and fourth child born on or after 1 August 2004. Parents of eligible Singapore Citizen babies enjoy a Baby Bonus of $3,000 cash for their first child, up to $9,000 in cash and matching contributions for their second child, and up to $18,000 in cash and matching contributions each for their third and fourth children. The cash and co-savings disbursement are summarised in Table 1 below.

For couples who wish to use Medisave for their fifth or subsequent child; they should have at least a combined total of $15,000 in their Medisave accounts.

The cash gift is disbursed over 2 years from the child’s birth and the matching contributions are made into a special savings account called the Children Development Account (CDA). Parents may use the funds in their child’s CDA to pay for fees at Approved Institutions (AIs) for any of their children. Currently, these AIs include MCYS-licensed childcare centres, MOE-registered kindergartens and special education schools, NCSS-registered early intervention centres and healthcare institutions licensed under the Private Hospitals and Medical Clinics (PHMC) Act. CDA funds may also be used to purchase MediShield or Medisave-approved private integrated plans.

Parenthood Tax Rebate and Working Mother’s Child Relief. Parents of Singaporean children also benefit from enhanced income tax benefits. The Parenthood Tax Rebate – without age requirements or qualifying claim periods - will provide tax rebates of $10,000 to $20,000, depending on the birth order of the child ($10,000 for 2nd child; $20,000 for 3rd and 4th child). The Working Mother’s Child Relief - without qualifying educational criteria - will provide working mothers a tax relief of 5% to 25% of their earned income for each child, depending on the number of children they have (5%, 15%, 20% and 25% for 1st to 4th child respectively). These tax measures apply to parents of Singapore Citizen babies born on or after 1 January 2004 (for Year of Assessment 2005).

Longer Maternity Leave. Working mothers of Singapore Citizen babies now have a total of 12 weeks paid Maternity Leave. The additional 4 weeks’ leave (after the first 8 weeks of en bloc leave) may be taken any time within 6 months from birth. Employers will continue to pay for 8 weeks of maternity leave taken for the first and second child, while the Government will pay for the additional 4 weeks for the first and second child, and the entire 12 weeks for the third and fourth child, subject to a cap of $10,000 per 4 weeks. The extension in maternity leave was legislated on 1 October 2004. For mothers of Singaporean babies born during the period 1 August 2004 to 30 September 2004, the Government has paid the extended maternity leave if it was given by their employers, subject to a cap of $10,000 per 4 weeks.

Childcare Leave. An employee covered under the Employment Act is entitled to 2 days of childcare leave per year if the child (including legally adopted children or stepchildren) is below seven years of age; and the employee has worked for the employer for at least three months. Childcare leave for each parent is capped at 2 days per year.

Infant Care Subsidy. Parents of Singapore Citizen infants, aged 2 to 18 months and attending licensed infant or child care centres, receive an infant care subsidy of up to $400 per month, from 1 August 2004.

Foreign Domestic Worker Levy Concession. Families employing foreign domestic workers enjoy a Foreign Domestic Worker Levy Concession of $95 if they have a Singapore Citizen child aged below 12 years staying in the same household. The concession is also available to families which have a Singaporean parent, parent-in-law, grandparent or grandparent-in-law aged 65 years and above staying in the same household, or if the employer or spouse is a Singaporean aged 65 years and above. This concession has taken effect from 1 August 2004.

WoW! (Work-life Works!) Fund. Many Singaporeans have said that their decisions to have another child depend heavily on whether they can have a healthy balance between work and family life. To help create a workplace environment that helps Singaporeans harmonise family and work commitments, the Government has introduced a $10 million WoW! Fund. The first $10 million was fully committed by April 2007 and the Government has decided to top-up the Fund with another $10 million. This fund provides financial support to companies to develop and implement work practices that facilitate work-life harmony, such as flexible work arrangements for staff.