BIRTH RATES AND PREVALENCE OF SINGLEHOOD IN LAST 15 YEARS

Mrs Lina Chiam:
To ask the Prime Minister over the last 15 years what has been (i) the birth rate among married couples; and (ii) the percentage of single Singaporeans.

Mr Teo Chee Hean (for the Prime Minister):
Singapore faces the challenge of declining birth rates. The last time that the resident Total Fertility Rate (TFR) was above the replacement level of 2.1 was in 1976. The resident TFR was 1.20 in 2011. 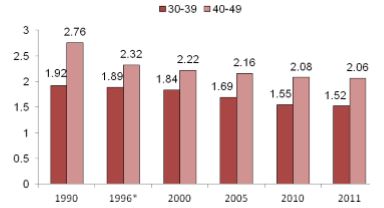 Source: Department of Statistics Note: 1995 data is not available, as this was not collected in the General Household Survey 1995.